I moved to the country in 2006. My pre-retirement rendition of city-girl-goes-country has survived and thrived for eleven years. What a surprise.
I bought some land and a 1940’s farmhouse at the edge of a farm-turned-Fox Hunt. My neighbors are hounds, horses and the occasional fox. The Master Huntsman spends long days tending and training the hounds. I never tire of watching daily training. Puck loves to watch too, but he looks like a fox so he watches from the safety of the deck.

In a 2016 article for the local newspaper, I wrote:

“I’m a first-time-country-dweller-from-the-city who knows nothing of hounds, foxes, horses and other critters that creep and crawl around. Yet country living amazes and amuses me. Sitting on the deck I watch the hounds romp and get in line to Tot’s commands”

Since then Puck, The Trickster Puppy has grown up. We celebrate his birthday in December and his reign as Puck-The-Perfect. Together we welcome and entertain visitors, family and friends at CASA POOH. This year the entire Hempleman family attended Homecoming at Warren Wilson College. I met the Hemplemans in 1965. I was a freshman and David taught classes in French, English and Drama. I took all of his classes. Barbara hired me to babysit their sons Wick and Terry. Over the years we became friends. Warren Wilson College offered great opportunities in learning and living. A surrogate family was part of the package–for me and many others.

This year’s Homecoming gave us time to hang with long time friends from long distances as well as those up the road a piece. The grown-ups who taught and nurtured me over the years are now good friends who continue to model life lessons. 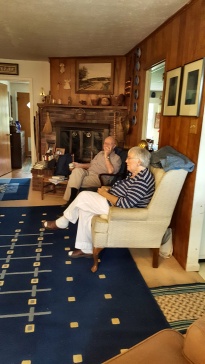 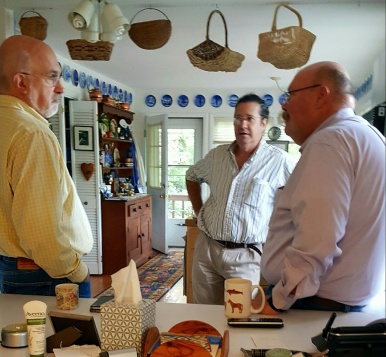 There are many stand-out events of the weekend. However, the prize goes to Beverly Ohler. Since the 1950’s when Bev & Fred arrived on campus, they gave time and talents to many. Fred was the minister and he taught religion classes. I took all of his classes as well as his poetry classes. Beverly joined with David Hempleman to make magic happen through theatre. David directed. Beverly designed and created costumes. She designed my costume for TWELFTH NIGHT. I still remember the lovely costume. Her attention to detail and design made the actors feel special. This Homecoming was a testimony of her talents. With the help of her crew, Bev gave us a tour of the Costume Department…a walk through the closets, nooks and crannies of costumes …but mostly into the corners of our memories. What a fabulous way to say good-by to the theatre & program that is closed as well as to a woman for all seasons.

The final Homecoming event is the church service on Sunday and the potluck that follows. For the past several years, I never miss this event. Those who remember know that I rarely attended church services as a student in spite of the requirement-with-threat-of-expulsion—or was it stoning. It was a period of don’t-tell-me-what-to-do and you-can’t-make-me-pray. It was probably a dawning realization of the foibles of organized religion. I grew up.

The sermon set the tone for the luncheon good-byes. Dr. Kevin Frederick, WWC ’77, delivered The Message: “Come Home to Yourself.” His simple message: “We carry home with us.” The idea of crossing thresholds in our lives” reminded me of crossing the country living threshold.

“There’s a Spanish word, “la querencia” which translates as a place where someone feels at home. It comes from the verb “querer” which means to desire, to want (The Rediscovery of America, Berry Lopez). Lopez explains that querencia is a place where one feels secure, a place from which one’s strength of character is drawn.”

It was a good coming home.
.

I continue to explore the re-wired world around the world. Piece/Peace of Mind is one of the ways to share my wanderings and wonderings. View all posts by Paulette Carter

Far from the big cities of Ft. Lauderdale, Boston, & Charlotte I found country living–A place to center, to get grounded…to rewire….space to carve out time to listen to the wind, smell the flowers, dig in the dirt, paint, write. Rewired–not retired!